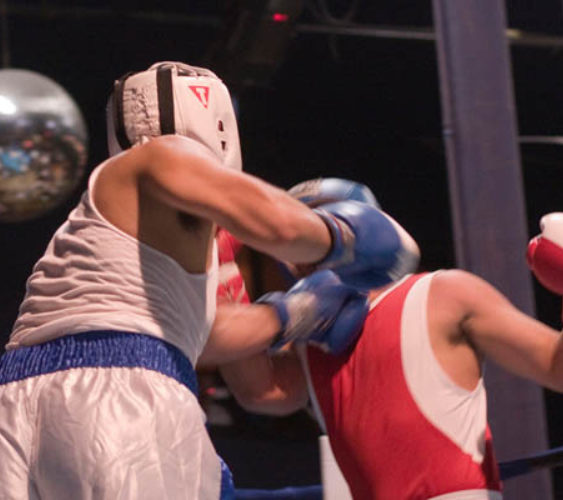 When Kevin Garnett and Carmelo Anthony got into a bumping match — one that culminated with Anthony trying to chase down Garnett before he got onto the team bus -- it was one of the uglier incidents of this year’s NBA season, and a highlight for fans who like to see a little attitude between bitter division rivals such as Boston and New York. These days, rivalries in sports have been professionally toned down as leagues have tightened rules and sought to build better images. Last week’s altercation was a glimpse at the rough-and-tumble world of decades past. In light of that, we got to thinking of some of the best player-to-player rivalries in the history of sports. Here’s what we came up with:

Roger Federer vs. Tiger Woods
If you think of rivalries for either of these two athletes, what come to mind first are almost certainly Federer-Nadal and Woods-Mickelson. Those are both tremendous athletic rivalries, but we find the cross-sport competition more fun, both because it’s a little humorous and because of how civil both players try to be with those within their sports. Woods and Federer have had fairly similar career arcs, turning pro in the late ‘90s (1996 for Woods, 1998 for Federer) and, starting in the early 2000s, ripping off periods of dominance unprecedented in their respective sports. They both went through fallow periods in which their ends were gloomily prophesied, then returned to the peaks of their games. Through all that time, the pair has maintained a friendly rivalry, including exchanging texts commenting on their respective number of major wins and needling each other on who was better. And, of course, like any good rivalry, it’s had its bitter moments as well, with family man Federer distancing himself from Woods after the revelation of the golfer’s infidelities.

Scott Stevens vs. Eric Lindros
Of any sport, hockey player rivalries are often the most enjoyable in a bloodthirsty sort of way, mainly because hockey players are basically allowed by referees to beat each other up on contested plays. Stevens and Lindros had one of the most intense such rivalry, fighting in almost every game that they played each other in Lindros’s rookie season in 1992 and coming to blows many times over the ensuing decade. Helping the intensity of the conflict was the fact that both players’ teams (the New Jersey Devils for Stevens, the Philadelphia Flyers for Lindros) were competitive players in hockey’s Atlantic Division, giving their head-to-head meetings. This one came to a head in 2000, when Stevens hit Lindros with a brutal, concussive check in Game 7 of the Eastern Conference Finals.


Larry Bird vs. Julius Erving
Bird’s more famous rivalry was with Magic Johnson, with whom he repeatedly battled for dominance in the NBA Finals and for the title of "Best Basketball Player Alive.” But his rivalry with Julius “Dr J” Erving and the Philadelphia 76ers may have been as significant — and was certainly more heated. Bird and Johnson met numerous times in the Finals, but for a week-in, week-out contest, Erving and the 76ers were the main rivals for the Celtics, as the two teams were the two dominant forces in the East in the early 1980s. Erving and Bird had a nasty personal rivalry, playing each other hard but “usually clean” — at least up until the rivalry became one-sided when Bird matured into the best player in the NBA. In one 1984 game, Bird was getting the better of a frustrated Erving. The result? Dr J took a swing at Bird, leading to a bench-clearing brawl.

Muhammad Ali vs. Joe Frazier
If physical altercation is the hallmark of an intense rivalry, than boxing is the sport with the best of the best. And there are few rivalries of any type that can match the intensity, fierceness, and general bad blood of the competition between Muhammad Ali and Joe Frazier, an epoch-defining contest that was one of the biggest cultural draws of the early 1970s. The first bout in their rivalry, dubbed “The Fight of the Century,” was the first time that two undefeated heavyweight champions met in the ring, and saw what had been a generally positive relationship between the two boxers devolve into enmity as Ali began referring to Frazier as an "Uncle Tom" and other unflattering things. Frazier got his revenge when he soundly beat Ali in the fight. Ali would have the last laugh, though, as he won their other two fights, including the legendary "Thrilla in Manila" in 1975.

Ty Cobb vs. Major League Baseball
He didn’t have the sort of mind-boggling statistics that contemporaries like Babe Ruth or Walter Johnson, but, in the early days of baseball, Ty Cobb was the one who most fans of the sport would point to as the greatest player in the game. The Georgia Peach may also have been the nastiest great player in the history of baseball, a virulent racist who was legendary for spiking players (supposedly filing his cleats so that he could draw blood on his slides) and engaging in fights. Among his uglier incidents, Cobb climbed into the stands to fight a heckling fan, resulting in a lengthy suspension from American League President Ban Johnson. Cobb’s me-against-the-world attitude made him one of the least-liked players in baseball, but it may also have been what made him successful.