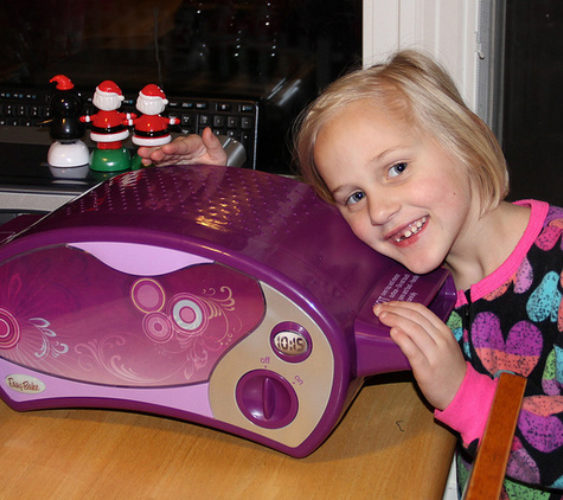 A 13-year-old girl lead the fight for baking equality.

McKenna Pope was invited to visit Hasbro's Pawtucket headquarters to discuss gender neutrality among their toy options. The New Jersey adolescent first gained attention when she started an online petition to get Hasbro to use gender-neutral colors for their Easy-Bake ovens. Not only do the ovens only come in "gender-specific" pink and purple, Hasbro's commercials for that product have traditionally only featured women and girls (see here, here, and here), even in this commercial from 2011.

Pope's plea came about when she attempted to buy her 4-year-old brother — her "favorite chef in the world" — an Easy-Bake oven for Christmas, only to realize that the product is marketed exclusively to females.

"I want my brother to know that it's not 'wrong' for him to want to be a chef," Pope writes in her petition, "Unfortunately, Hasbro has made going against the societal norm that girls are the ones in the kitchen even more difficult."

In fact, although women are traditionally depicted as the rulers of their personal kitchens, men have traditionally dominated the world of professional cooking. So why, asks Pope, does Hasbro insist on pushing such an antiquated stereotype?

Pope's petition to Hasbro had gained more than 40,000 signatures and the attention of celebrity chef Bobby Flay, as well as various other well-known male chefs.

As of this wriring, Hasbro has added some gender neutral colors to their easy-bake oven collection! Check out their stylish Ultimate Oven in black here.