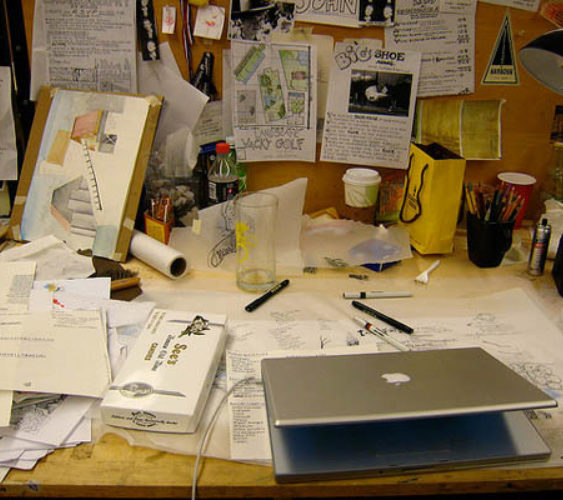 Being creative isn’t easy — there are all kinds of tips and tricks you can try to help get those creative juices flowing. But, what if we told you it was as easy as leaving a few crumpled pieces of paper on your desk?

In fact, a study published in Psychological Science took a look at how people react to messy spaces around them, instead of how messy people versus organized people work. For the study, a group was first placed in front of messy or organized spaces, told to do some work, and then asked to do separate tasks. First, they had to choose between an apple and a chocolate bar, as well if they'd like to donate to a charity; later, participants had to devise new uses for a ping pong ball; for the last task, they had to look at a menu and decide if they wanted a vitamin boost in a hypothetical smoothie, and whether that boost would be “classic” or “new.”

The folks in front of the clutter-free desks were far more likely to go for the apple — showing greater self-control and, as a consequence, a greater desire for healthier habits. They were also more likely to donate to charity when asked by the researchers — implying a stronger tilt toward moral integrity.

However, the people placed in the messier areas were able to come up with more ideas for the ping pong balls, and were overwhelmingly more interested in trying the “new” vitamin boost than the “classic.” This led the researchers, a team based out of the University of Minnesota, to conclude that “disorderly environments seem to inspire breaking free of tradition, which can produce fresh insights.”

In fact, other than fashion designer Alexander Wang’s freakishly super-organized workspace, it appears that famously creative folks have a penchant for messy desks. As the folks over at Slate ponder, it may be that those who don’t spend hours keeping everything tidy simply have more time to think things over — though it may be that the desire for something “new” actually just shows a sadness with the participants’ state of chaos.

The flip side of all of this is that being tidy may actually lead to healthier life choices, as well as a desire for ethical uprightness (ie. more willingness to contribute to charity and other morally “good” things). So, basically, those of you with clean desks are paragons of virtue and beauty with no soul, while those of you lacking in cleanliness are geniuses who are also jerks. It’s a no-win situation, so you may as well just go ahead and reach for that chocolate bar — at the very least you have some very good-looking folks you could possibly model yourself after while alienating all of your friends with your jerkish ways.