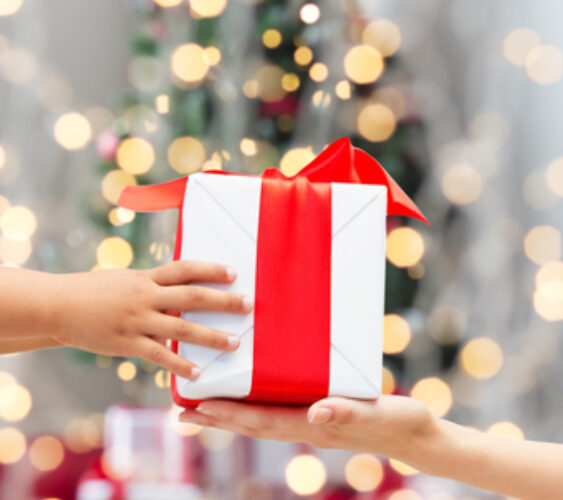 Science Says It's Healthier to Give Than Receive

Let's start with an easy question: Why does everyone like Christmas and Hanukkah and other events where gifts are involved? It's an easy question because there's an easy answer. People enjoy those events because people like getting stuff. It's not because they like giving gifts. This is obvious, right? Well, that's just too bad, because a study says we're all better off giving, rather than receiving.

The experiments into this dynamic have been around since 2002, but it was only recently that the benefits of being unselfish were shown in tests. The study was led by Michael Poulin, an assistant professor of psychology at the University at Buffalo. He, along with a team from three other colleges wanted to find out just how much being unselfish — and giving to people — would impact a person's health. This is why he named his paper the completely unoriginal "Giving to Others and the Association Between Stress and Mortality." Hey, these guys are geeks, not artsy types. And well, at least Poulin knows it.

"As the title of our study indicates, we tested the hypothesis that providing help to others would predict a reduced association between stress and mortality for the helpers," Poulin told Science Daily. "Specifically, over the five years of the study, we found that when dealing with stressful situations, those who had helped others during the previous year were less likely to die than those who had not helped others."

To come to that conclusion, his team studied over 800 people from Detroit. Yeah, we know. Sorry Detroit. Poulin and his researchers conducted interviews with the people about how many stressful events they had to deal with during one year, and if — during that same time — they had "provided tangible assistance to friends or family members."

What the team found was that those who had reported helping people and giving services to others during the past year were better able to deal with stress and overall, much healthier. In essence, explained Poulin, "Helping others reduced mortality specifically by buffering the association between stress and mortality."

It sounds like a bunch of crap, right? Well the team is convinced that their study only improves upon what other similar experiments have found. "These findings go beyond past analyses to indicate that the health benefits of helping behavior derive specifically from stress-buffering processes and provide important guidance for understanding why helping behavior specifically may promote health and, potentially, for how social processes in general may influence health," explained Poulin.

Okay, sure, we can see how giving and being unselfish can make one feel better about themselves. But really, in the end, doesn't everyone like getting gifts, not giving them? Also, does this mean Poulin and his team refuse gifts now? Because you know — and this is just a suggestion — we could always use more stuff.