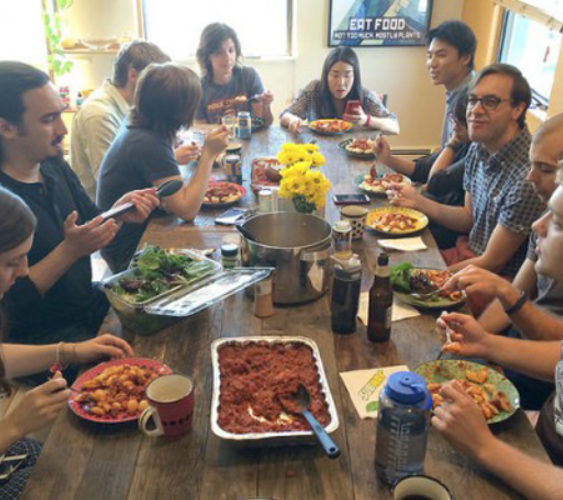 Anyone who has tried to lose weight can tell you how hard it is. No matter how many pounds you're trying to shed — 5 or 50 — it's just insanely difficult. Why? Well because food tastes good. And the worst food for you tends to be the best tasting. If carrots tasted like chocolate chip cookies then it'd be easy to drop the pounds. But they don't, and so you do your best. You exercise like crazy and you try to eat tons of veggies. There is one thing you probably haven't tried yet though: Making new friends.

According to a study by experts at the University of Illinois, if you're friends with healthy people, you'll be more healthy. The team analyzed receipts from almost 1,500 people who ate in groups at an Oklahoma restaurant during a 19-week long period. The menu listed 51 items for people to choose from, and those items fit into eight categories: soups/salads, burgers/sandwiches, combo meals, pasta, vegetarian dishes, choice steaks, prime steaks, and daily specials. Some of the groups were given menus that listed the calories for each meal. The other groups received menus without calories listed. In addition to chronicling which meals were eaten, the team of experts logged how much each meal was enjoyed by the diners.

What they found was that although items like salad and veggie dishes were the least popular, people eating at the same table would order them if another person did. In other words, the more salad that was ordered, the more salad others ordered. If one table had two people order from the soup/salad group, that table was more likely to have other diners order from the same group. It's peer pressure in the most helpful way. "We want to be different from our friends a little bit, but not too different," the study's lead researcher Brenna Ellison, told Scientific American.

The research is more optimistic than another study, that found putting nutrition labels on foods didn't do much to encourage healthy eating. In effect, the study just showed that the labels were preaching to the choir. "The new findings also suggest that those who want to eat healthier already know which menu options contain fewer calories, so making nutrition information available doesn't change these customers' behavior," explains Live Science.

The key to weight loss, at least in part, is our friends. So before setting your next dinner reservation, consider who you're inviting first. Is it someone who is going to order the chicken fried steak with a side of chicken fried soda? Or is it someone who will opt for something healthier? Yeah, we understand that the healthier friends might not be as fun. But maybe having a little less fun, and more responsible dinner companions, is exactly what you need.