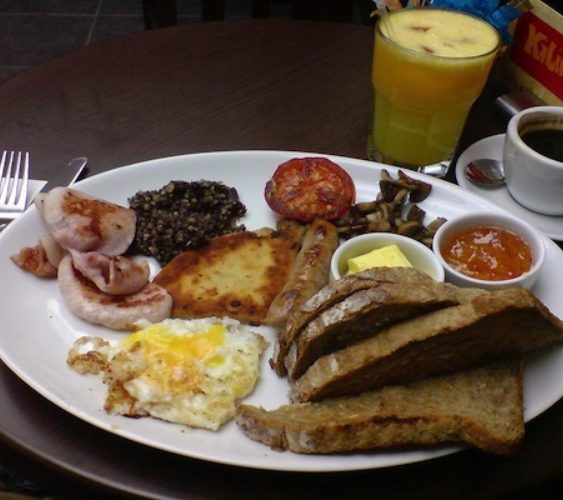 In Defense of Pancakes: Skipping Breakfast Is Bad for Your Health

Hey Guys, a piece of advice when you rise and shine tomorrow morning: Remember to grab something to eat. It'll help keep you healthy for life. Because, though it may seem counterintuitive, a new study suggests that skipping breakfast may actually lead to obesity, among other serious medical conditions, especially for men.

Let us explain: Researchers asked men to fill out a survey inquiring about what they ate and when they ate it, and then tracked the health of those men for 16 years. The men who said they tended to skip breakfast were actually found to be at higher risk for heart attack or fatal coronary heart disease. Lead author for the study Leah Cahill explained that skipping breakfast can lead to many “risk factors,” including obesity, high blood pressure, high cholesterol, and diabetes — which, in turn, may lead to heart disease or even an eventual heart attack.

All 26,902 of the participants began the study free of any heart illness. As the study went on, 1,572 men either experienced non-fatal heart attacks or died of coronary heart disease.

Another interesting correlation found in the study was that many of the men who said they skipped breakfast tended to be younger, single smokers who worked full time, didn’t exercise much, and drank more alcohol. Those who ate late at night also seemed to incur a higher risk of heart attack than those who did not.

Skipping breakfast not only deprives your body of the calories it needs to kick-start your metabolism, but it also leaves you craving sustenance — people who skip breakfast are likelier to reach for sugary or unhealthy snacks later. Plus, your body has an easier time digesting carbs earlier in the day and it’s ability to do so decreases as the day goes on, so it’s better to get your carb intake in the morning, anyway.

That being said, we’ve never had a problem eating breakfast at breakfast-time, lunchtime, or dinnertime. Who can deny the awesomeness that is bacon and eggs?