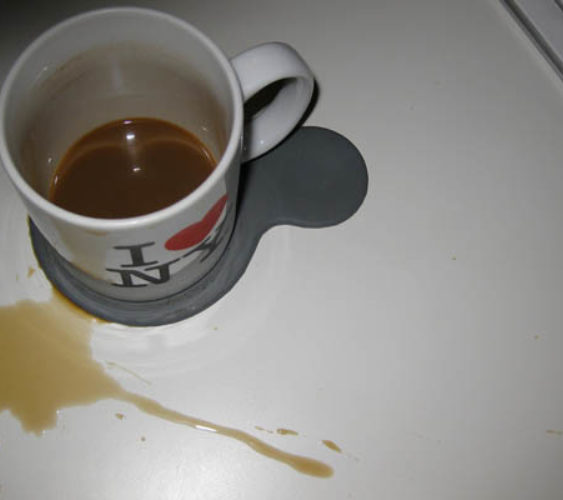 Spilling Coffee is in Our DNA

You can't expect scientists to always focus their collective brains on important issues like curing devastating diseases or solving society's problems. Sometimes, even those guys have to let loose and explore some really insignificant items. Such is the case with a paper being published in the American Physical Society's Physical Review E. A team of nerds (we kid!) got together and decided that people spill coffee far too often for us to not know why it happens.

The team, located at the University of California, Santa Barbara, started out with the simple common occurrence of spilled coffee. Maybe the group of scientists were just clumsy, but give a scientist a chance to justify his work, and man, he will shoot for the stars. "I cannot say for sure if coffee spilling has been detrimental to scientific research to any significant extent," the study's author, Rouslan Krechetnikov, told Science magazine. "But it can certainly be disruptive for a train of thought." In other words: "Sure I won't say that me spilling my coffee is keeping me from curing cancer, but you never know, so shut up and let me do this frivolous experiment, dammit."

Here is how the experiment went down. Krechetnikov and his team asked a group of volunteers to walk in a straight line while holding a mug of coffee. Each was recorded while they walked in one of two positions: Looking at the coffee mug, or straight ahead. Also, inside the cup, a tiny monitor noted how often the caffeinated beverage spilled. What they found was that we can't help spilling coffee because we're human. Not in that "to err is human" sense. In that "humans walk at the same rate as coffee flows back and forth, thus making it almost impossible to stop it from happening. Sadly, spilling coffee is in our DNA.

Other scientists were impressed. "This is a very cool study," said Lei Ren, an expert in biomechanics at the University of Manchester, and probably someone who isn't very hip. "It reveals the sophisticated interplay between human body dynamics and the fluid mechanics of spilling coffee."

So how do we stop it? Well, the Krechetnikov team said that coffee mug companies could alter their designs. But, "I expect it is more cost-effective for manufacturers to just provide a lid for our coffee mugs, which some already do," he added. The other suggestion from all the research? Slow down, dummy. If you walk slower, you're less likely to spill. Also, don't fill your cup up as much. See? Told you this was ground-breaking stuff.

No word on if apes are coffee spillers too, but if we're guessing, we'd say we can expect Krechetnikov's team to tackle that vital question next.