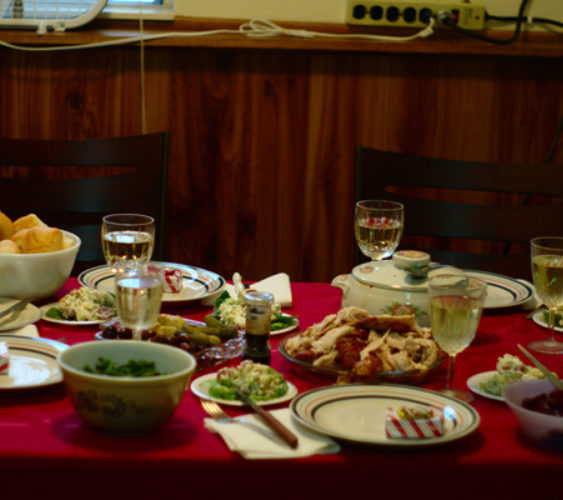 The holiday season is near and that means we are now all resigned to accept a few things: That time flies no matter what happens, that having a large extended family is good only in theory, and that our bellies are fatter than they were just about two months ago. The latter can be explained by the obvious — that we eat because there's so much food around this time of year, but in reality, it's a little more complicated than that. We all pack on a few more pounds during the holiday season because our "food clock" has gone haywire.

The technical term for the "food clock" is "food-entrainable oscillator," which is why we're sticking with food clock. It's basically a group of genes and molecules in the human body that work together to keep the metabolism running copasetic. The food clock is, as it sounds, vital to our existence.

"The food clock is there to help our bodies make the most of our nutritional intake," explains Science Daily. "It controls genes that help in everything from the absorption of nutrients in our digestive tract to their dispersal through the bloodstream, and it is designed to anticipate our eating patterns. Even before we eat a meal, our bodies begin to turn on some of these genes and turn off others, preparing for the burst of sustenance -- which is why we feel the pangs of hunger just as the lunch hour arrives."

When the holidays arrive, we basically throw a giant wrench into our food clock, thus upsetting the balance and making us eat more than normal. This makes sense, but a new study by University of California, San Francisco (UCSF) researchers has gone a long way toward figuring out how, on the most basic level, this happens.

In a recent article published in the Proceedings of the National Academy of Sciences, the team explained how they used mice to determine that one single protein, PKCγ, is the culprit to keeping us on — and our food clocks — on track. In experiments with mice, the scientists fed one group at normal times and one group during the night. The mice who were fed at night — and were equipped with the protein gene — adjusted to the odd eating times and were able to keep their weight down. The mice without PKCγ were not able to respond to changes and therefore fattened their tiny mouse bellies.

This revelation can certainly help you explain your big belly during the next holiday season, because at the very least, mentioning the PKCγ gene will help distract people from the cranberry stains on your shirt. Use the information wisely. And please, wipe your face.