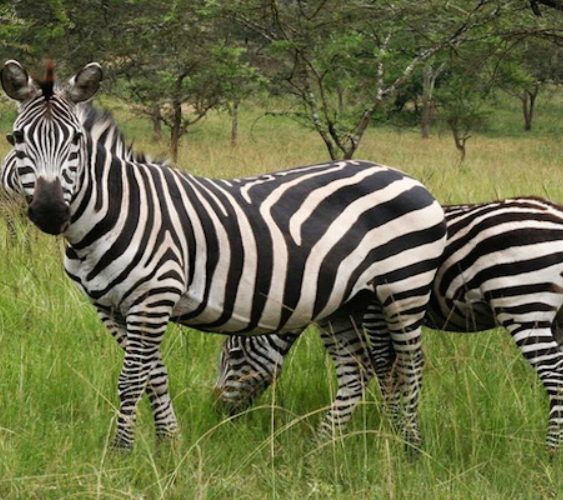 We Finally Know Why Zebras Have Their Stripes

Let's face it, the zebra is the coolest equid around. Horses are just boring and donkeys are kind of cool because they're so apathetic about everything, but zebras are it. They're the raddest member of the taxonomic family of horses. And it's all because of those stripes, which up until now, baffled scientists. Why, experts wanted to know, do the stripes exist? What purpose do they have, other than making it so radical looking? Finally, we have an answer: It's all about keeping flies away.

Charles Darwin was a smart guy, but even he was puzzled by the zebra's stripes. He pondered that they might be used for camouflage, but tossed that idea aside, noting that they actually made the animals stand out more. "Their sleek ribs glistened in the sun, and the brightness and regularity of their striped coats presented a picture of extraordinary beauty, in which probably they are not surpassed by any other quadruped," Darwin wrote in Des cent of Man. His other theory was that the stripes helped males and female zebras figure out which zabra to mate with.

Darwin wasn't the only expert to take a stab at figuring out the stripes. Other theories about included that they're there to confuse predators; they're intended to help maintain a zebra's body heat; and they're part of zebra's complex communication system with other zebras. Darwin, of course, was much closer to getting it right than he thought with his camo idea.

According to researchers from the University of California-Davis, the zebra's stripes are, in fact, used to hide the animal from predators. But flies are a much smaller attacker than Darwin likely ever considered. Tim Caro, a wildlife biologist, solved the riddle by looking at the big picture. He and his team observed zebras, but added donkeys and other members of the horse family. They found that the zebras stripes essentially confused flies, so they couldn't bite them. Other studies have shown that flies can't focus on striped items. They prefer to land on all light or all black surfaces.

When looking at horse family population, Caro and his team found that wherever the population of flies were high, there bound to be zebras. In science speak, Caro explained in his report: "Here we match variation in striping of equid species and subspecies to geographic range overlap of environmental variables in multifactor models controlling for phylogeny to simultaneously test the five major explanations for this infamous colouration."

"I was amazed by our results," Caro told USA Today. "Again and again, there was greater striping on areas of the body in those parts of the world where there was more annoyance from biting flies."

So yeah, it looks like a problem that has vexed scientists for centuries has been solved. Others will test this theory to see if it holds up. But for now we're going with it: The zebras stripes are there to keep flies away. And, of course, to make them radical.