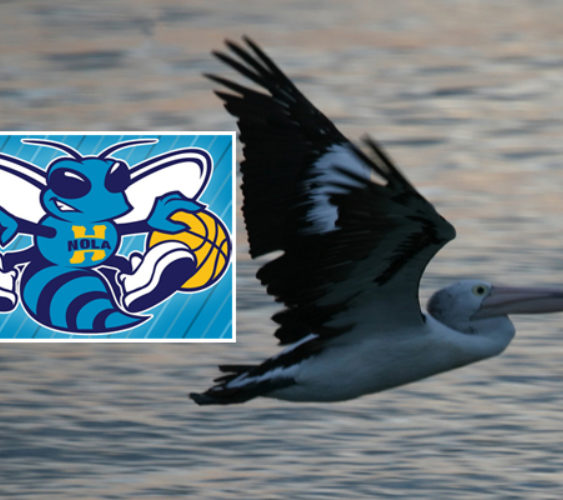 Remember when the New Orleans Hornets decided on a new team name? The Hornets, a name long associated with the franchise’s former home in Charlotte, adopted an unlikely new identity: the New Orleans Pelicans, in homage to the state bird of Louisiana. The new name quickly gained both detractors and defenders, but more importantly: it got us thinking about weird team names. So we sat down and came up with some of the strangest team nicknames (finding one example for each major pro-sport) in American sports. And hopefully, you'll come to the same conclusion that we did — Pelicans isn't that odd of a team name.

The NFL has a couple of teams that have unusual names with understandable origins: the 49ers name, for instance, refers to the California gold rush, while the Baltimore Ravens draw their name from the famous Edgar Allen Poe poem (Poe was a native of Baltimore). Though their long existence has gotten us used to the Bills’ name, however, once you start thinking about it, it becomes one of the strangest imaginable: a team name drawn from the individual name of “Buffalo Bill” Cody, a cowboy whose only connection to the city that gave its football team his name was the fact that his nickname happened to be the name of the city. The Bills also use a bison as their logo — even though "Bill" is a name for a person, not a kind of buffalo.

Here, again, are two teams whose names seem normal because they’ve been around for so long: both the White Sox and the Red Sox have been in existence since the founding of the American League (though not always with those names; the Red Sox began their existence as the Boston Americans). But let’s be clear: these are two teams whose nicknames come from the color of the stockings worn by players in the early days of those teams’ respective existences — and they didn’t even want to spell the word correctly! Though both teams have had significant success in recent years, they also both went through legendarily long championship droughts — perhaps the revenge of the gods of the English language?

Anytime between 1993 and 2005, the title of strangest team name in hockey would have gone to the Anaheim Mighty Ducks, a team whose name came from the greatest hockey movie trilogy of all time. Since their 2005 switch to being just the Ducks, however, the Wild are the NHL team with the least understandable nickname. Is it a noun? Is it an adjective? Just what is a "Wild," anyway? Perhaps due to that confusion, the Wild also boast one of the ugliest logos in all of professional sports, what appears to be a bobcat head filled with trees. As fate would have it, the Wild lost both their first game and their first Western Conference Finals appearance to — that’s right — the Ducks.

Among the things that Utah is known for are great skiing, the Great Salt Lake, and the Church of Jesus Christ of Latter-Day Saints. One thing it is definitely not known for is its phenomenal jazz music. Why, then, is its basketball team known as the Jazz? In one of the great accidents of sports history, the Jazz began their existence in New Orleans, where their name made perfect sense; after relocating in the wake of several disastrous seasons, they kept the name in the Jazz-unfriendly state of Utah. Though they were competitive in the 1990's, largely due to their stars John Stockton and Karl Malone, they have yet to win an NBA title.