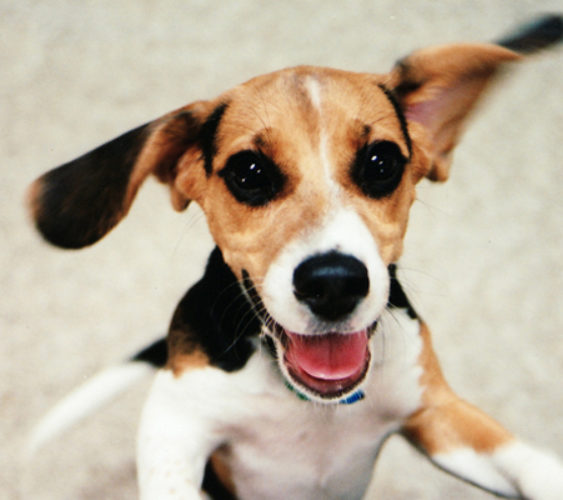 Your Dog Is Truly Happy You're Home. It's Science!

You've probably seen the videos of soldiers coming home from war and being greeted by their dogs. Or if you haven't, and you're a dog owner, you know how fun it is to come home to your little furry dude and have him flip out from excitement. But do dogs realize how long you've been away? After all, Spot seems to lose his mind when you come home if you've been gone for 10 minutes or if you've been gone for several days. As with anything regarding the relationship between dogs and humans, the whole thing is complicated.

The first thing to realize is that dogs form extremely strong bonds with their owners. This is because the owner provides food, walks, affection, etc. The stronger the emotions tied to an owner, the more the dog remembers the owner. Stanley Coren, a professor emeritus at University of British Columbia and author of The Wisdom of Dogs, recently told Pacific Standard that a dog is much like a two or three year old child, in that they "will have love and joy and fear and anger and surprise, but they tend not to have the higher social emotions like guilt, pride, shame, that sort of thing."

Think about any toddlers you know. They are balls of emotion. When they're happy, they're bouncing off the walls. When they're sad, they're throwing tantrums that make you question why people have kids. But this is how it is in the brain of a dog: Those extreme highs are very real. There have even been studies that show a specific region of a dog's brain fires on all cylinders when it recognizes a familiar person. This is because dogs do process time, just not in the way you do.

"The essential difference appears to be that humans can pinpoint when something happened in the past by relating it to other events," explains a post over at AnimalPlanet.com. "For example, we remember our wedding day as well as who attended, what songs were played, and the happiness we felt. Dogs, on the other hand, can only distinguish how much time has passed since an event has occurred (e.g., 'My food bowl has been empty for six hours.'). Of course, they don't need only memory to tell them this; a growling stomach says it all."

What makes dogs go crazy when you do come is the fact that you're back, and that you missed them too. Dogs are creatures of habit, and so they expect you to come back. So when you do, they get excited. You have something to do with the excitement too, though. When you're gone for a long time, you're very excited to see the dog, so the dog picks up on your emotions, and sort of mimics them. So yes, they're more excited to see you after you've been gone for a long time, but it's not all them. You're wagging your tail too, just in a different way.